The Tower of Philadelphia

Today I would like to share a recipe I have blatantly copied from the restaurant Matahambre in Málaga, Spain. You should definitely check out this restaurant if you are close to any of the locations. The prices are right and the food is very good.

This recipe is based on their fresh cheese salad, and is basically nothing more than cream cheese (Philadelphia), marmalade and walnuts. I call it the Tower of Philadelphia.This dish makes an excellent starter on a table of six or more. 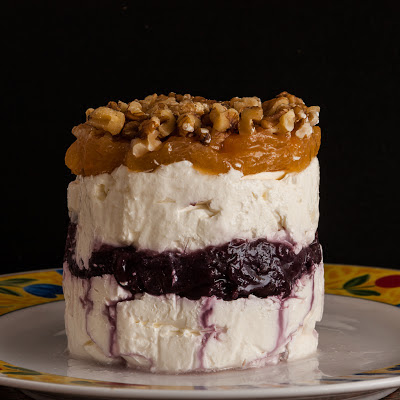 Before you start, cool down the cheese and the marmalade to make the tower stable while you mount it. If you can, use unopened jars of marmalade, since the texture will be stiffer.

Start by rolling the cardboard into a cylinder with a diameter of approximately 10 cm. Fix it securely with tape and put it on the plate you plan to serve the dish on. Roll up the parchment paper in a similar cylinder and put it inside the cardboard.

Begin filling the cylinder with cream cheese with a spoon, until you achieve an even layer of around 2,5 cm. Then, without stirring the marmalade much, add a layer of around one cm. If you stir the marmalade you risk that it will float out more and make the tower collapse. Now repeat the process with another layer of cheese and then marmalade. Finally cover the tower with a layer of pieces of walnuts.

Put the tower in the refrigerator until it is to be served. Carefully open the tape and dismount the cardboard and paper cylinders. Serve the tower with bread or crackers and let each guest spread cheese and marmalade on the bread.

Bonus game: For how long will the tower stand? Which guest will finally knock it over?

Posted by Magnus Akselvoll at 00:44